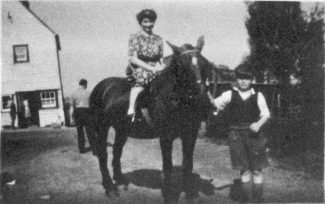 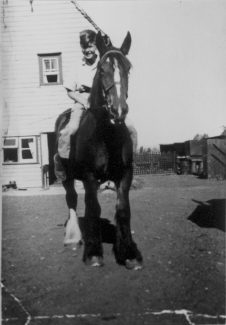 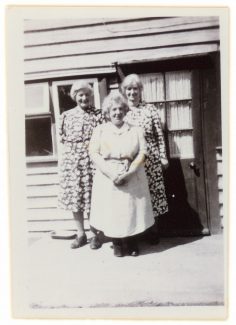 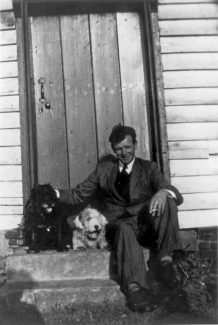 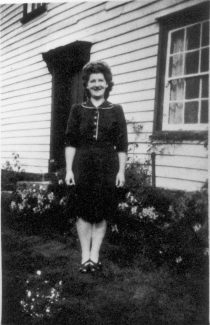 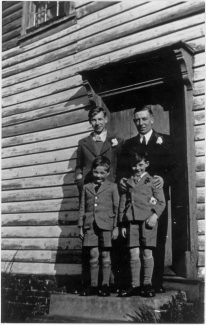 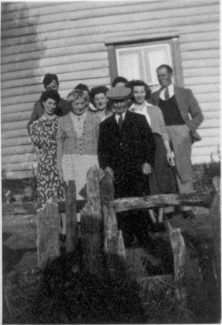 zoom
Family Group west facing - note very old fence. Big man at the back is farmer Ralph, the elderly couple, his & Barbara's Parents. The other man was a Boer War & First World War soldier, maybe at Omdurman, Sudan 1898 (a regular at the White Hart). The Lady was a staunch member of Thundersley Congregational Church
Richard Hills family collection 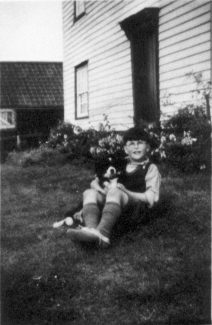 Dick wanted this recorded as, in Robert Hallmann’s book “Thundersley & Daws Heath – a History”, the scanty mention of this ancient farm states that it is now brick-cased and plastered. But Dick remembers the Farmhouse from his childhood, in its original weather-boarded state, and has several photos depicting it at that time.

Dick was interviewed for the Community Archive by Sue and Peter Lewsey.

The following records Dick’s memories about his time growing up in Thundersley.

In 1943 the War Agriculture Committee took over Burches Farm. They installed Ralph Brewster to farm it correctly.

Ralph had a small dairy herd, which he milked by hand, a couple of working horses, pigs & poultry.

In 1944 at the age of 12, after school and weekends, I went to help/work for Ralph. I worked for him, on and off, for 4 years. My future wife, Barbara, was Ralph’s younger sister and she lived in the Farm House. In 1943 the Farm and House were in a very dilapidated condition.

The milk production was 2 churns a day and was picked up by Howard’s Dairy for the Milk Marketing Board: their lorry went all around the local farms, collecting milk.

The War Agricultural Committee took over a lot of derelict land in the district, including the 40 acres which nowadays is the Cemetery and Woodside, and Ralph took over some of this land to grow wheat. Harvest time involved using a tractor-drawn Binder to cut and make the Sheaves. Sheaves were made into Stooks to dry, then carted to the Stackyard and made into Stacks using Pitchforks, then thatched to keep the weather out. At a later date, a contractor (Keeling of Crays Hill) arrived with his Threshing Machine to thresh the corn. (Combine Harvesters were a later innovation, about 1950.)

Ralph was joined in 1946 by his brother Harold, who had been a Japanese Prisoner of War, firstly on the Burma Railway and then in a Japanese shipyard.

In about 1950/51, the owners of the farm wanted it back. It was still the original timber building then: I believe it was rendered over in the late 50s (or maybe 60s).
We heard a story that someone from the Essex Record Office visited the farm, expecting to see a timber house – and was most upset to find it had been rendered!

The photos were taken in about 1947 –1949 and show various angles of the house. The North Wall was plain black weather-boarding.