A Fishing Trip to the Salvation Army Brickfield Pond 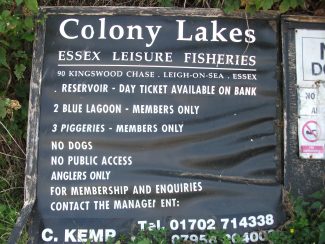 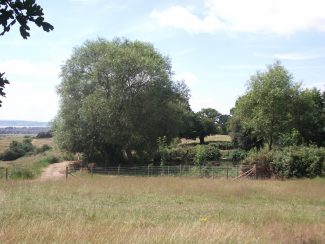 zoom
Another nearby pond (South of footpath east of Sayers). (Editor's note, Do you have a photo of the actual pond involved?)
Terry Barclay

zoom
The pond can be seen towards the bottom left hand corner of this photo taken before the brickfields went out of use
from Hadleigh An Essex Village, by Marion Hancock & Sandra Harvey
"The Pond"

Down Castle Lane, along past the piggeries, through the old World War Two gun emplacements (the actual guns long since removed) and we were there, at what we called The Canal (a small inlet at the eastern edge of the pond. I say pond because since those days I have learnt the dictionary definitions of both pond and lake. We always thought of the Brickfields as a lake back then, but as it was in fact created by the removal of clay for the brickworks it must in fact be a pond having no natural feed (as far as I am aware).

Anyway, when we arrived at the Brickfields we discovered to our dismay, that it was completely frozen, a fact we hadn’t considered, despite the freezing weather.
We did manage to break a small hole in the ice, so we set-up our gear and carefully cast our baited hooks into it. My friend Rowan soon got impatient and decided to go for a walk across the ice! I told him I didn’t think it a good idea, but off he went anyway, disappearing into the mist!

After several minutes I heard the splintering of ice and a disembodied voice shouting out for help. Flipping heck I thought, he’s fallen in. My mind raced, wondering on the best course of action. Should I follow Rowan’s route as the fastest way across, or go round the edge as the safer of the two. Naturally, I didn’t know where on the pond my friend had fallen in, of if indeed he was still alive, as I had heard no more sound since that first shout for help.

Sense, and I must admit a little cowardice, persuaded me the most sensible (and safest) route was round the perimeter, so off I went in a clockwise direction. This was not at easy as many bushes and trees had grown up along the water’s edge since the Brickfields had ceased production, many years before. In fact, half way round my path became blocked. I decided to try the opposite route and returned to my original starting point.

When I arrived there and just as I was setting off again, there he was! Rowan appeared through the mist. Exactly at the point he had disappeared.
My relief was immense as I had imagined the worst by this time and feared he had drowned, being unable to get back onto the ice.

What in fact had happened, was that Rowan had got to the other side and the ice gave way right near the edge, where the water was fortunately only deep enough to give him a ‘booter’ as we called it. Like me, he decided the quickest route was the way he had come, so he merely stepped back onto the ice and squelched his way back across the ice.

Quite whether this decision was based on logic, fear or just plain instinct, I will never know. In fact I’m sure Rowan didn’t either. Bizarrely, he thought the whole event was a bit of a hoot.

Needless to say, we didn’t stay and complete our fishing as Rowan’s teeth were chattering louder than those joke false teeth you can buy in joke shops. And of course his feet and legs were freezing cold.

Oddly enough, although I did go fishing a few more times after that day, I have never returned to The Brickfields to fish.

(Editor’s note: If you have a photo of the actual pond which you would like us to add to this article, please e-mail it to hadleighhistory@gmail.com with a note of who should be credited for the photo)