My recollections by Richard Hills 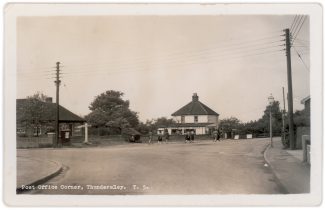 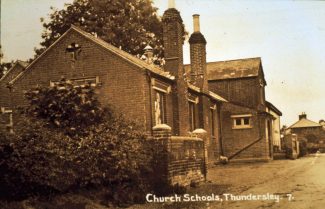 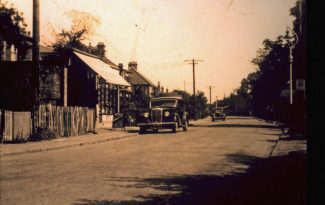 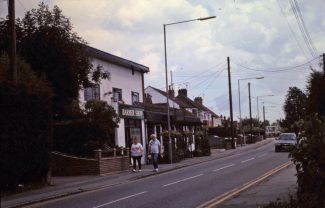 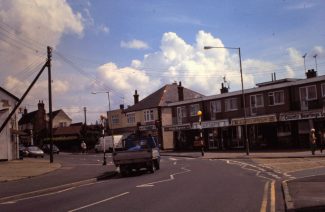 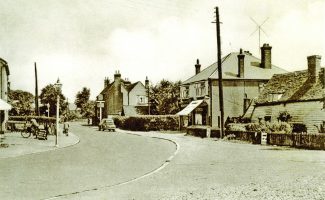 zoom
The shops between the White Hart and the old Hart Cottages
H.& T. C. Archive 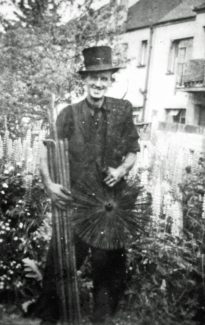 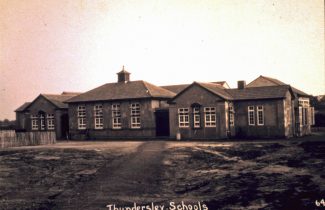 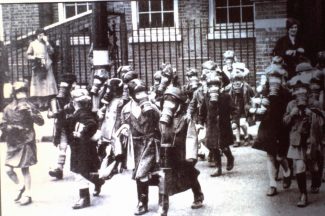 These are some of my memories of Thundersley village shops as a boy. My recollections start at the Post Office at the end of Church Road behind the clinic, coming towards the White Hart Pub.  Opposite the Post Office (which was also a general store) was the old school which housed the County Library, which was open 2 or 3 afternoons a week. It had 3 to 4 big cases of books; I believe two lady volunteers ran it.

Next to the Library was a large green painted corrugated hall, the church hall used for Cubs, Brownies, dancing etc. After the church hall the road changed to Hart Road.  Between the hall and four cottages was Pond`s shop.  It wasn’t much more than a big shed.  I believe it was a grocers and general store. Behind the shop was another wooden building, which I think was also a store.   Mr Pond who ran the shop was a frightening figure, hands on the counter glaring at you and demanding ‘What do you want!’ My daughters think this greeting was probably only for scruffy little boys!!!

Past Raymonds Drive was a field then two red brick cottages, then another red brick house which had a small shop in the house selling sweets and tobacco, run by two ladies I believe. It was empty during the war.   In 1946 Howard Stone opened it as an electrical and household goods shop. One end of the shop was let out to Jock the Barber. Jock was just demobbed from the RAF.  I believe Howard was in the Navy during the war.  Howard was Jock`s first customer, I was second! It is now Castlepoint Heating Offices; the barber is still there, although in a separate building that was built later in the garden beside the shop.  Not the same barber though! Over the years the original building has had extensive alterations.

Further along the road, what is now No. 33, the little building on the side was Mrs Stone`s Accumulator and Battery shop. Mrs Stone had a machine to recharge the accumulators, which were needed to run your wireless.     Further on, in a bungalow next to Wiggins, was a cobbler`s shop. A crippled man sat on the bench repairing boots and shoes, also selling laces, boot polish etc.  The bungalow was knocked down when the Care Home (Godden Lodge) was built.

The next buildings were Wiggins garage, workshop and office. The garage was a brick built proper garage where a fleet of 5 to 6 lorries were maintained and kept overnight.  The lorries were probably 30cwt vehicles, painted a creamy colour with Wiggins name on the side.  They were used to take the men employed to the various sites around the area, quite noisy at 7 o’clock in the morning starting the day’s work. As boys we used to watch the mechanic working on maintaining the lorries.  I believe it was Fred Horner.

The lorries went in 1939/40 because building stopped.  I believe the Wiggins family were involved in farming during the war.  Towards the end of the war and 1946 they were involved in repairing bomb damaged buildings. My elder Brother worked on this.   The workshop and office I now believe were in the old farm stables.  Next was the big red brick farm house, the Wiggins home, with several outbuildings behind which housed a big black car; I believe it was a Daimler.
Where the Tandoori etc. is now was part of their garden.  A large Chestnut tree and a big Apple tree with a chestnut fence in front.

The next shop which is now the wool shop was Mr Fawkus fish and chip shop. Very good to eat, served up in a newspaper, open 2 or 3 days a week. Attached to the fish shop was Mr Hail’s sweet shop and tobacconist. It was at the front of the house they lived in (now the kebab shop).  There was then a gap, to what is now the nail shop; I’m not sure if it was used as a Ladies hair salon or a café.  You can tell where the building was as there are still the same tiles round the entrance.   It was then open ground, a field until the corner of Common Approach, where Bambers store stood, a hardware shop. I think it was shut during the war.  Opposite in Hart Road was a house ‘Strathmore’, which was blown flat by a bomb.

Crossing Hart Road at that point, the only shop there was a newsagents, probably gifts, sweets etc. My sister tells me it was owned by a Mr Holden (it has now got Jewell above the shop, at the time both shops were used). Coming from the newsagents towards the White Hart Pub it was open space covered with bushes etc., with a small pond in the middle, now Swans Green Road.    The next building was the Blacksmith shop, now the pub car park. I never saw it used as a blacksmiths, at the end of the war it was a welding shop (Mr Skinner).

As a boy I took horses to be shod, down the Hart Road at the back of the tin roof bungalow or to Hadleigh (Ash Road), or Rayleigh behind the White Horse pub. The White Hart (there are numerous photos of it) when I first knew it, was red brick, with the main door where the bay sticks out. On a nice sunny day George Hobbs the landlord would stand surveying the area.  The red bricks were soft and children used coins to make holes or carve their initials into the bricks, so the bottom 6 feet were tiled to stop this I assume.  The gent’s toilet was a separate block a yard or so past the pub.  I think it was open to the sky, again built of red brick.

Next to the pub was open ground, now their gardens.  Next was Patmore bakery and shop, I believe the bakery is still there, the shop is now Dans.  The bakers shop sold bread, cakes and I believe groceries etc. Also very good bread pudding.  I think Mr Patmore baked the bread and his wife ran the shop.  Next to the bakers was Connie Grimwade greengrocers shop. She also sold sweets and tobacco. During the war there were no bananas, not sure about oranges but I do remember a shipment of lovely red eating apples arriving from Canada. I queued up and we were allowed 4 apples per family.  Mr Grimwade I believe was a horse dealer and there were carts, horses and stables behind the shop. This shop is now the chemist.

After the greengrocers were the Hart Cottages and then Dark Lane and the school. A red telephone box stood outside the school gates.   Where the car park is now, a fairly large white timbered house stood (weatherboard?).  An elderly foreign lady lived there; she would give us a penny if we filled her water tank by pumping from a well near the house.

Grimwades was the last of the shops. Going towards Kenneth Road there were two poultry farms. The first one was the nice house before the Dentists (the dentists is a new build).  The second one was where the four fairly new houses are now.  It was a small oldish house called Willows Wood owned by a Mr Danes, the grounds stretched back towards Kings Park Road, with a lot of chickens, ducks etc. some big trees and an orchard.  There was a big pond, possibly where Chatsworth is now. Mr Danes paid me 10d an hour to clean his chicken houses out.

Further on lived the village Chimney sweep, Mr Harding.  I was at school with some of his children. Just around the corner in Kenneth Road was a very large elm tree, next to the bus stop. In the first house there was a Doctors surgery, I believe one of the Rayleigh doctors came there a couple of days a week (Dr Nichols perhaps?).

There were two butchers in Thundersley; one was in Kiln Road near Bradley Avenue (Coleman). The other I believe near the Woodman Pub (Ross).  Mr Coleman delivered meat in a very smart two wheeled cart drawn by a high stepping Hackney horse.   There were several tradesmen going round the area using horses and carts.

Food was rationed for most of this period, we all had ration books. Whether you had to be registered to a certain shop I do not know. My Mother shopped at London Co-Op in Hadleigh (where Boots is now) and our order was delivered once a week. Quite a small cardboard box, which lasted a week.    I joined Thundersley School in September 1937; I lived quite near the school. The school had about 320 pupils in 8/9 classes.  Pupils aged from 5 – 14.  Children walked from Daws Heath, Kingsley Lane, Fane Road, Burches Road, Kents Hill Road, Manor Road and Moorland Avenue.

We had a few extras evacuated from the London bombings. In my class we had a nice chap from Yorkshire; he spoke a different language (joke).  On the field behind the school they built brick air raid shelters with reinforced concrete flat roofs. There was a blast wall inside the entrance and an escape tunnel at the rear which you had to crawl through to get out.  Fortunately they were never really needed although when the siren went we did run to our class shelter.

I hope my recollections are correct and I do not offend anyone.  If anyone thinks I am wrong or can add anymore please add your comments below.

[All photographs added by Bob Delderfield]