You are here: HomenextMain SubjectsnextPeoplenextNorman Hudder: A Hadleigh Farm Colony worker who went to war 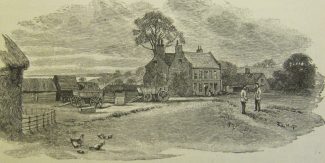 The year 2014 is the 100th anniversary of the outbreak of WW1, a war that was so terrible a struggle that its memory still haunts us in the 21st century. Brutal and vast in scale, it became known as the Great War. Here in Hadleigh, Essex, little is known of who or how many Hadleigh Colony workers went to war, but I am grateful to Ken Porter from Basildon Heritage who came across an article in the Essex Newsman dated 1st January 1916 and has passed it on to me.

The story we assume is true and there is no reason for it not to be, other than we cannot find any war records to substantiate it. It appeared in under the column ‘On the Field of Honour.’

The Salvation Army has issued, under the title “Won!” a brief account of some aspects of its remarkable work against poverty, misery and crime during the year. From this booklet we take the following pathetic story.

‘What higher duty can a man undertake than to conquer himself, or help others to reformation of character?’

‘Even the heart of the Government, which is usually filled with intentions of strict justice, was touched to pity by Norman Hudder. Committed to penal servitude for a very serious crime, he remained for many years in prison.

All the long-service officials knew him. Year after year slipped away, going with leaden feet in the cells where each hour was a day and there was always Hudder, the convict, in the same place, shut away from society he had horrified, doing the same tasks, seeing the same strip of sky and square of walls during “exercise.”

What had really happened to the man who was Hudder, who lived inside his body and thought and felt like other men, nobody troubled to guess but after his crime and imprisonment, he was docile, careful, obedient, meek. Hudder never gave the warders trouble. He was a prisoner but a gentler, quieter prisoner could not be.

“No 0924 has been here a lifetime. Look up his papers and report to me,” said the new Governor after some months of his reign.

There were no faults mentioned in the prison record. It was remarkable. ‘We’ll let the Salvation Army have him’, decided the authorities later. ‘They will guard him and he may have a spell of something like ordinary life before he dies. Write to General Booth.’

The General received the letter and replied. Hudder found himself passed from a warder, who said with astounding feeling on parting, ‘Good-by, 0924, You’ve done your best to wipe out, if ever man did. I hope you’ll get on.’

A Salvation Army Officer, who took his hand – Hudder had forgotten how to shake hands – said,’God bless you!’ You belong to us now, It’s all in the family!”

In bed, a real bed, at the Land and Industrial Colony, Hadleigh, Essex, that night, Hudder wept. It was so long since he had shed a tear, that he sat up and cried child-fashion, weeping loudly and pitifully. A Salvationist came and put an arm round his neck and Hudder wept away the hidden misery of years.

How he worked! I saw him once loading hay on one of the Colony’s wains and never forgot it, or the sight of his face, tanned and healthy now but such a face of man as I had rarely seen and am not likely to see again, wholly free from judgement of anybody and full of grateful kindness to all. Ah, Hudder, a Violent Temper, walking in the road that day by the field, prayed God such victory might be given-as He gives to you!

Hudder was converted then. With the permission of the authorities, he afterwards went to a situation and his conduct and service were exemplary…..War Came……

The soldier that had been Hudder before he was a convict, sprang to arms and would not be denied. He joined the King’s Army. He became a sergeant. He went to France and the Front.

In February he was killed in action, fighting for the Old Land, whose laws he had broken and whose heavy punishment he had borne. ‘Somewhere in France’ he lies in death, one among the noble host who yielded their lives that the Old Land might be the Old Land still.

Peace to him! Many a man has a more ignoble history. The Salvation Army has no tears for Hudder, late 0924. His sins were forgiven, the White Comrade must have met him there on the battlefield and taken himself the soul. He died to save. The vast family of all nations, called The Salvation Army, owns Hudder –‘One of Ours.’

A pathetic story, we do not think so, a very moving and to some degree a sad story. We assume that Hudder was one of the hundred Salvation Army men that enlisted in the Army.