You are here: HomenextMain SubjectsnextPeoplenextThe Brothers Tyrrell and Blossoms Farm

The Brothers Tyrrell and Blossoms Farm

This rather splendidly elaborate Victorian advertisement was sent to the Archive from northwest Kent by Charles Gibbons. You may wonder why the editors have chosen to display this item which concerns a shop proprietor whose premises were at Horndon-on-the-Hill.

Eleazer Tyrrell was born in Rayleigh in 1804 and lived his working and family life at Horndon, building a very successful business which began as a grocer’s shop and over a period of some fifty years expanded and diversified taking in a very wide range of products and services to increase his trade.  {Ed:  note glossary entry at the end of the article.} 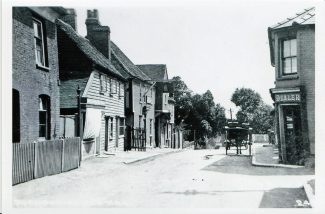 A view of the old High Street, Horndon on the Hill

The business is to be found listed in a variety of the county’s directories. On one occasion Eleazer is described as grocer, draper, miller and agent for the Royal Exchange Insurance Company. His life in Horndon must have kept him and his employees very busy. He also owned some land and that is where Hadleigh comes into the picture.

Eleazer took possession of Blossoms Farm in Hadleigh High Street in 1833 until at least 1867 but it was his brother, James Tyrrell, who lived in Blossoms Farmhouse for many years. We do not know the arrangement between the brothers, whether James paid rent like any other tenant or that there was some other agreement existing. Eleazer also owned 10 houses and shops in Hadleigh High Street. His will, made in 1866 although he survived until 1882, refers to his property, Blossoms in Hadleigh, which was to be sold and that his brother was the tenant. 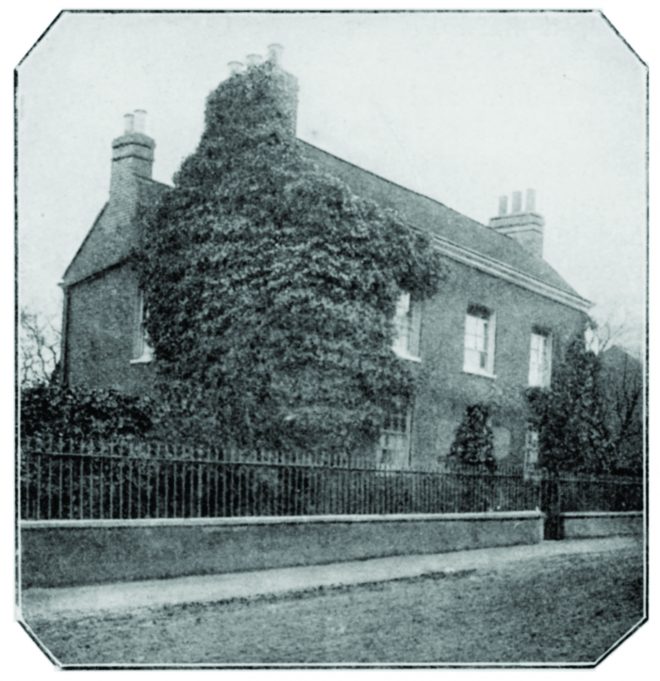 Blossoms, on the south side of Hadleigh High Street; later renamed “The Homestead” by the Salvation Army.

The brothers were the sons of William and Sarah Tyrrell of Rayleigh. William was a farmer turned shopkeeper. In 1833 when William decided to write his will James was working in the business with his father, Eleazer having removed himself to Horndon by this date. At this same time William decided to sell the business – after all his sons were now married and setting up their own businesses. As it turned out William did not die until 1844.

Eleazer married Dorothy Strutt Smith at Hadleigh in 1827 and they had six children, all born in Horndon, before Dorothy died in 1844. A year later he married Sarah Winmill, a Dagenham woman. They had one daughter, Helen. Eleazer himself died at Horndon aged 77 in 1882. His eldest son, Ray, who inherited his father’s business continued supplying the needs of the good people of Horndon into the 20th century but by 1911 had retired. 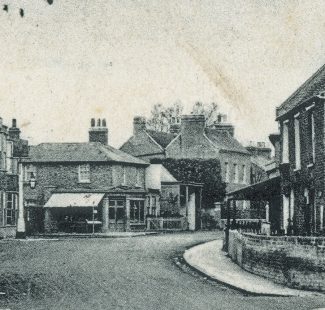 Blossoms is the large double gabled building in the background.

James Tyrrell on the other hand was very much a man of Hadleigh, farmer, churchwarden and school manager. His signature is to be seen many times in the old Hadleigh National School log book*. Three years younger than Eleazer he married Mary Ann Higgs, a local girl, at St James the Less in 1830. In the very small community of Hadleigh it is clear that James along with the Wood family held considerable influence, but James’s sphere of influence spread wider when he moved with his family to Canewdon Hall, taking over its farm. This appears to have lasted about ten years because by 1851 the Tyrrell family were back in Hadleigh where James remained until his death. James and Mary Ann had at least eleven children, four born in Canewdon and the rest in Hadleigh. I include a few basic facts about most of the children of James and Mary Ann. Sadly, only four of them appear to have lived beyond 40 years.

Emma Tyrrell 1831-1894 the eldest child remained unmarried and ran a school in Littlehampton, Sussex, called Hadleigh House
Mary Anne Tyrrell 1832- 1874 married Henry Nash Wood, farmer of South Benfleet and Hadleigh
James Higgs Tyrrell 1834-1872 became a draper in Liverpool, married a widow in 1861 but died aged only 37
Alfred Wood Tyrrell 1837-1877 married Louisa Wood of Hadleigh becoming a grocer in Basingstoke, Hampshire. Several children.
George Tyrrell 1840- ?1915 worked as a silk mercer’s assistant and became a costumier and employer in London. Married but no children.
Daniel Higgs Tyrrell 1842-1871 marrried Alice Belcham at Rayleigh in 1866. They were living at Jarvis Hall, farming 220 acres, when Daniel died.
Alice Tyrrell 1844-?  In 1891 was a housekeeper on Old Bond Street, London, and 1901 a church worker in Plaistow.
Sarah Frances Tyrrell 1849-1926 married Claude A. Imbert Terry who died at 33 leaving his widow comfortable enough to live independently. Two sons.
Ellen and William Tyrrell not much discovered yet.
Fanny Elizabeth Rendish Tyrrell died as a baby.

For those of you who enjoy the game of cricket you will be pleased to hear that James appears to have loved his cricket. Cricket scores in old Essex newspapers reveal that he was a useful batsman with Hadleigh Cricket Club and had played also for Rayleigh and Canewdon. When he lived at the last named village he lent one of his fields to the team for their matches. He did the same at Hadleigh although as yet we do not know where the Hadleigh cricketers played in those far off days. Presumably it would have been one of Blossoms’ pastures. The Chelmsford Chronicle tells us that when the Hadleigh cricketers commenced their new season on the 12th of April 1855 the club treasurer was Mr. Henry F. Wood, the secretary Mr W. Pissey and the President of the club none other than Mr James Tyrrell.

It would be wonderful to receive further information from a descendant of either brother, more especially if any family photos of them still exist.

{Ed: The advertisement includes the word “slops” which was an historical nautical term for sailors’  breeches (trousers) ending just below the knees or above the ankles, worn mainly in the 18th century.}